May 10, 2019
Descendants 3 is an upcoming American musical television film. It will be the third installment in the Descendants series, following Descendants and Descendants 2. The film is written by Sara Parriott and Josann McGibbon, and is directed by Kenny Ortega. The film is set to premiere in August 2019 on Disney Channel. 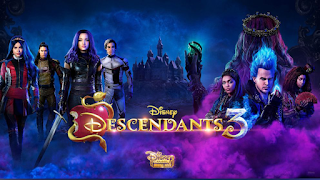 The film tells the story of a good-hearted protagonist in a fairy tale who once again defeated the evil villains and locked them on an island. The story begins with the growth of their respective children.

Ben, the beauty and beast child, is about to succeed as the king, and his first policy is to pick out a few evil villains and let them come to the new world to study and live, which has triggered a series of interesting things 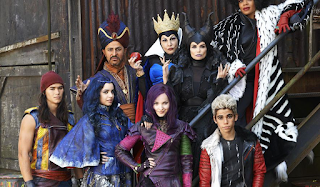 In this movie, the strong lineup of the first two will continue, and many new characters will be added. I believe that fans have a general understanding of the plot, these high-popular protagonists in addition to the restoration of the plot, in the shape is also very consistent! 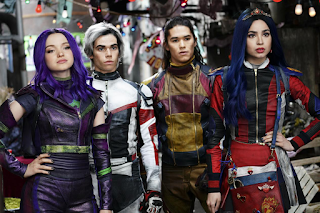 The first is these people who starred.

Their identity is a descendant of the "great villains." From the beginning of the film, they have rebellious, tricky, unusual styles, and so are their shapes.

Especially their hair color, full of publicity and bright, Mal is the descendant of the devil, her representative color is purple. This is vividly reflected in the second part of the film, the Mal of the blonde and the Mal of the purple hair represent two distinct personality sets.

Evie has always been a blue style, and the long blue hair represents charm.

Not only the shape of these protagonists, but also the style of the villains.
Uma is the second major villain to carry out the whole process. The third part will still appear. The style follows the consistent style and her identity.

Even Harry has a new look, which makes me very much looking forward to his performance in a new movie. 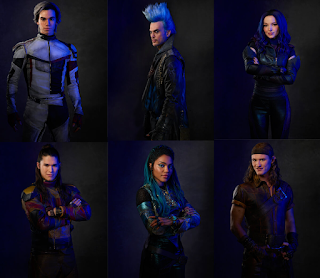 In addition, the characters that have not appeared, Mal's father is about to debut, presumably for this, fans who have seen the trailer are already waiting.

So in this movie, will “get better” and “save the world” with our protagonists?
Let us wait and see!

What is your favorite character design? Which hair color can represent your personality?

Please leave a message below the blog to tell me your answer. :)

Popular posts from this blog

Homecoming is coming soon, are you ready?

July 09, 2019
The back-to-school season in September is coming soon. I think everyone wants to wear beautiful exquisite and beautiful dress participates in homecoming and other activities with a new look, and become the focus of the audience. If you want all above mentioned, then you need get started a.s.a.p. There will definitely be someone to ask, isnt it too earlier to prepare now? The answer of course is no! Let's follow what I have seen before,lets see what we need to do to be a spot of the ball. The first is you need an Elegant dress. The dresses that go to the ball are very important. If you want to be the focus of the crowd, then you must be prepared dress carefully. The most important thing is that you can't wear same dress with someone else. It is the best solution to order an exclusive dress. Many people have a misunderstanding that custom-made dresses are very expensive. In fact, many online malls are cost-effective, also the style of the dress is
Post a Comment
Read more

What kind of wig is suitable for different eye makeups?

July 02, 2019
Rose red eye makeup is best suited to match the pink Bob Wig, which can be perfectly combined with makeup. Bob Wig is not very long, it doesn't look very gaudy, but it has a pretty lively youthful sense. This match is the first choice this summer. In addition to the pink hair, you can also try to match the burgundy hair, bright red color are also a good choice. This dark-colored eye makeup looks lighter and more common, and is suitable for the beauty of women of all ages. Especially suitable for matching with natural black color hair, whether it is long hair or short hair, it will look noble and elegant, coupled with a black long dress, it will be definitely the most popular style this summer. Of course, if you don't like black, you can also wear light blue or ivory white, which is fresh and elegant. The hair can be matched with blonde or long hairlength platinum blonde wig are suitable for eye makeup. Let’s take a look at this purple color eye makeup, which is
Post a Comment
Read more

luxhairshop
We've been committed to helping you find the best in wigs, hairpieces and extensions.